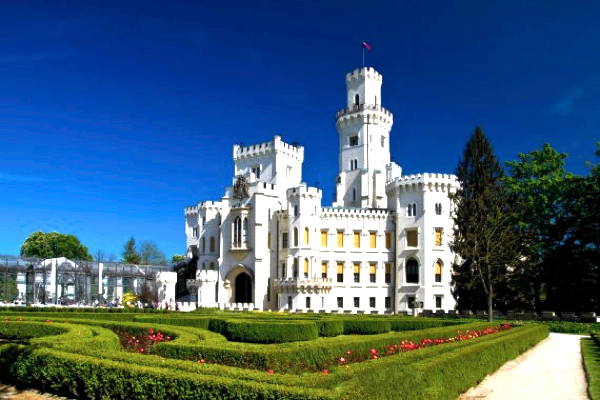 The tour includes a trip to Cesky Krumlov

The Hluboka Castle was founded in the middle of 13th century and it was executed in Gothic style. Its original name was Frauenberg Castle. During its history it was rebuilt several times, acquiring both the Renaissance and the baroque features. In the middle of the 17th century the castle became the property of the Schwarzenbergs and exactly to this dynasty, the castle reached its current appearance. In the 19th century at the request of the Duchess of Schwarzenberg, it was rebuilt in Neo-Gothic style, becoming a copy of Windsor Castle. The architect of the project was the Viennese master Franz Beer. Schwarzenberg owned the castle up to 1945. The Castle has 140 rooms, 11 towers and 2 inside courtyards. The walls both inside and outside, are decorated with hunting trophies, of its former owners. In addition, in the rooms of the castle can be seen armor of the Schwarzenberg family. In the castle is represented the largest in the Czech Republic collection of tapestries, a collection of Dutch paintings of the 16th and 17th centuries, ancient weapons, porcelain, glassware and furniture. The lock is surrounded with an English garden in which grow rare species of trees, and also there is a system of ponds.