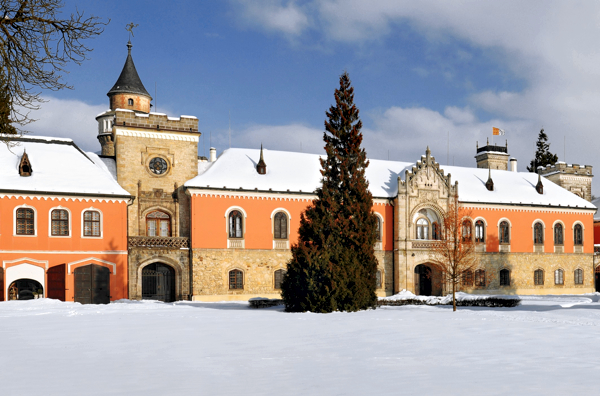 Sychrov Castle is a great romantic castle of the end of the 17th century. It is located 100 km from Prague, in the picturesque place of northern Bohemia, so called “Bohemian Paradise”, on the border of three mountain ranges. Undoubtedly, is a crown jewel of the of the picturesque North-Bohemian region. The castle was built in the Baroque style in 1690-1693 by Rohan family, French aristocrats exiled by the French Revolution, that come from the very top of the European nobility, and became a real “French corner” in Czech Republic. Sychrov Castle is also called the “carved fairy tale of the Czech Republic” - the castle interiors are decorated with elegant wooden lace, the creation of which took nearly 40 years and a whole fortune. The castle is surrounded by a magnificent English garden. During this tour you will explore the magnificent residential and ceremonial Chambers of the Prince's Castle, wonderfully decorated with wooden carvings. Beautiful antique furniture and rich interior will not leave you indifferent. In the castle there is a museum of composer Antonin Dvorak, who had stayed in it and was very fond of these places, for their unmatched beauty and original features. The castle is steeped in mysteries and legends about ghosts that tell chilling stories about the ghost of the Black Lady. Maid in black occasionally appears and scares the intrepid tourists. But you should not be afraid. Black lady just keeps hidden in the castle untold wealth.