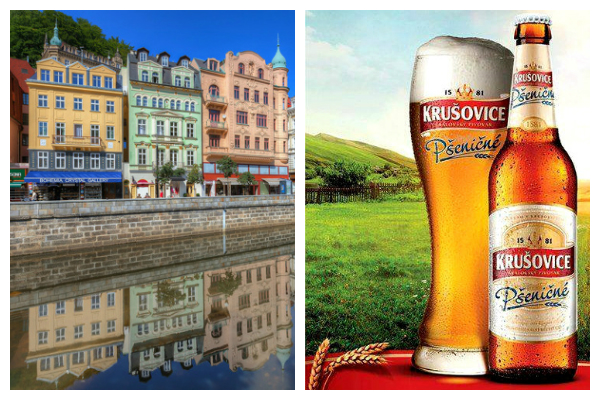 The Spa–town Carlsbad (Czech: Karlovy Vary) was founded 600 years ago. It is located near the Germany border, in one of the most picturesque places of West Bohemia. Low House - Hotels and sanatoriums are located in the Valley of the Doupov Mountains, dressed by dense forests. The main streets of the city follow the curves formed by the passage of the river Tepla. The name of the river comes from the word “warm”. The water in the River at significant length is really warm, because it is heated up her hot Carlsbad springs. Total number of registered springs in and around Carlsbad are 132, including those that have ceased to exist. At the present time in Carlsbad, there are about 60 hot springs that are currently in use. Guests coming for treatment use 12 of them. Springs differ from each other in temperature, content of dissolved carbon and oxygen CO2 and in the productivity.

On the way to Carlsbad, we will stop in the small village of Krusovice-the brewing capital of the world. Beer here began to brew in 1581, and already in 1583 the Emperor Rudolf II., appreciating the exceptional quality of the local drink, bought the brewery for the Czech crown. There we can taste the local beer and buy souvenirs.