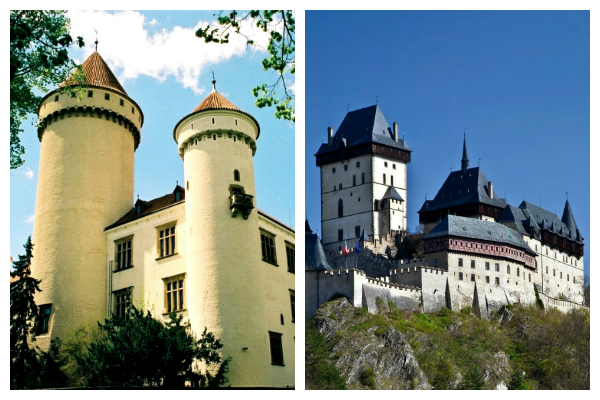 Konopiste Castle is one of the most famous monuments of the Czech Republic. Great fame it gained due to its interior, beautiful English garden, and a rich collection of porcelain, glassware, furniture, tapestries, paintings, also to one of the richest and unique medieval collections in Europe of hunting weapons and hunting trophies. The last owner of the Konopiste Castle was Frantisek Ferdinand, the successor of the Austrian imperial throne who lived there in 1887-1914. He founded and assembled a collection of so called Sf. George and placed it in the form of a greenhouse under the South Terrace. In 1900, the collection consisted of 3750 pieces of art dating from 15th-19th centuries. A park with a pond and a garden of beautiful roses surrounds the castle.

Karlstejn Castle. In 1355, the Czech king Charles IV. came to the throne of the Holy Roman Emperor. This event radically changed the fate of the provincial Town (Prague), for 23 years, making it the capital of Europe. However to keep enormous riches of empire in Prague was unsafe. So the Emperor attracted the best architects of that time and built the majestic Karlstejn Castle. It quite corresponded to its high position of the owner of Europe and became truly unapproachable. For many years there were stored treasures of the Holy Roman Empire, sacred Christian relics, the Czech Crown jewels and State Archives.