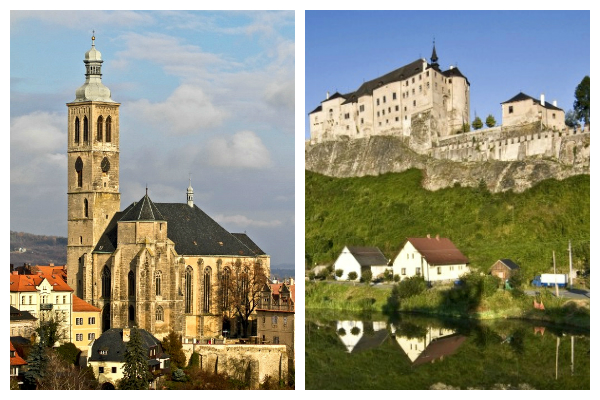 There are cities whose fame is in the distant past. One of them is Kutna Hora. In the 13th century the monk of the Sedlec Monastery, gathering brushwood in the forest, found a silver nuggets there. Noting that place with his cowls (the Kutten) or from the word mining (kutani in old Czech), as a marker. He hurried home to tell the brethren about the valuable discovery. Thus began the silver fever, so turned the city into the medieval capital of silver. While walking around the city, you will go down in the old silver mine, look in the yard, where the Italian masters coined the famous Prague coins, groschen of the whole kingdom, and thrill seekers will appreciate the unique visits to the cemetery Chapel of the Sedlec monastery and Kostnice (Bone Church). The Interior of which, including the altar and chandelier, was made of more than 40,000 human skulls and bones. And most importantly- you will see, without a doubt, the most beautiful gothic church in the Czech Republic-Church St. Barbara is the saint patron of miners.

Sternberk Castle was constructed in the 13th century, named and still owned by members of the same family. Among the members of this family were brave knights, diplomats, scientists, politicians, teachers and historians. During the Communist era Sir Sternberg worked as supervisor of the Museum, in confiscated at his family Castle. In 1989, the old fortress was returned to former owners. Today there is an exhibition that emphasises a rich collection of paintings, antique porcelain, and unique furniture. Now, at the home of his ancestors, lives and works, the last representative of dynasty Zdenek Sternberg.