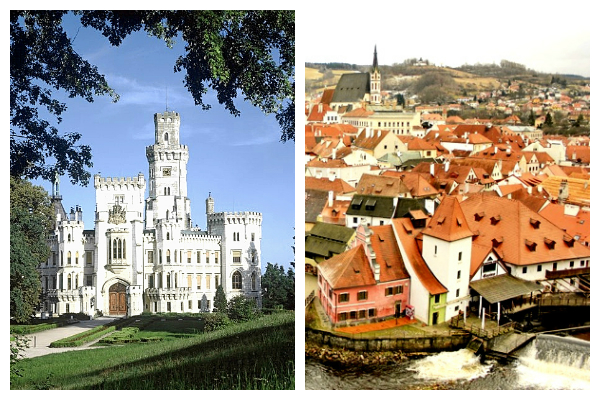 Cesky Krumlov- is located in the south of the Czech Republic, in the picturesque bend of the Vltava River, or as it is called-"the city of a red rose”- this flower has been a long time a symbol of Rozmberks - owners of these places. The huge Castle dominates above the river straight in the center of the city, hanging over red-tile roofs and a maze of narrow streets. The city, the Castle, the amazing beauty of the surrounding nature, represents an unusually harmonious combination. The name of the city is endless whimsical turns of the Vltava River, in translation from German "Krumau" means “Valley curve”. It seems that all the houses in the city have some incredible shapes, and erecting their builders did not even know about the existence of right angles.

The Hluboka Castle is situated in Hluboka nad Vltavou. It was built in the middle of 13th century and it is also executed in Gothic style. Its original name was Frauenberg Castle. During its history it was rebuilt several times, acquiring both the Renaissance and the baroque features. In the middle of the 17th century the castle became the property of the Schwarzenbergs and exactly to this dynasty, the castle reached its current appearance. In the 19th century at the request of the Duchess of Schwarzenberg, it was rebuilt in Neo-Gothic style, becoming a copy of Windsor Castle. The architect of the project was the Viennese master Franz Beer. Schwarzenbergs owned the castle up to 1945. The Castle has 140 rooms, 11 towers and 2 inside courtyards. The walls both inside and outside, are decorated with hunting trophies, of its former owners. In addition, in the rooms of the castle can be seen armors of the Schwarzenberg family. In the interior is represented the largest in the Czech Republic collection of tapestries, a collection of Dutch paintings of the 16th and 17th centuries, ancient weapons, porcelain, glassware and furniture. The lock is surrounded with an English garden in which grow rare species of trees, and also there is a system of ponds.